You are being monitored – Khaki Monitor

by dpelser on February 21, 2016 in Uncategorized

Prior to joining Khaki Monitor in 1988, Steve Howells had been in the band Asylum Kids who enjoyed a relatively brief but blistering run as one of South Africa’s premier hard rock bands.

At one Asylum Kids concert, lead singer Robbi Robb had shouted “fuck John Vorster, fuck the government!” at the audience. Within minutes tear gas canisters were lobbed into the venue and the crowd began to riot. The band had to escape by climbing through a window.

Khaki Monitor originally hailed from Cape Town where they emerged from The Mix club. They played many gigs around that city and became quite popular. The band wrote a lot of their songs in Afrikaans long before the famous concert at the Pool Club made Afrikaans a “cool” medium for rock music. Saayman said that he wrote in Afrikaans simply because he was Afrikaans speaking. The band said that the Afrikaans songs were often received with open hostility by English-speaking audiences, who according to Selley would sometimes sit on the stage “with their backs to us”.

The band took their name from the lyrics of one of their songs “ek is die monitor wat in jou camera staan/ ek is die khaki man/ ek weet wat hier aangaan”.

Apart from Warrelwind, the band recorded a demo of other songs at Shifty Studios. Unfortunately, their music languished in the Shifty vaults for a long time until finally being released in 2015.

Willie Saayman wrote about what he observed around him and the band’s music was described as an equal mixture of funk, blues and soul. Saayman’s father disagreed and called Khaki Monitor’s music duiwelsmusiek, he asked the local pastor to pray for his son. The fulcrum of the band consisted of Saayman and Selley, who in an interview said that they disagreed a lot. Even their musical tastes were different-Saayman confessed to liking Prince and Madonna at that time (1987), whereas Selley’s record collection consisted only of Aretha Franklin, Dollar Brand and Marvin Gaye.

Like many other bands at that time, Khaki Monitor were political and strongly rejected the Nationalist Government’s policy of apartheid. This would eventually get one of them into trouble.

At a gig at the Thunderdome club in Johannesburg, Howells decided to hand out leaflets that promoted the End the Conscription Campaign (ECC). The ECC had been formed to oppose the government’s policy of conscripting young white boys into the South African Defence Force.

Unlike Jameson’s (where the band often played), the Thunderdome attracted a more conservative crowd. Howells thought that it would be a good idea to expose these people to the ECC message. Many of the audience members responded postively to the pamphlets, but when Howells handed the leaflets to a group of about six men, he knew he was in trouble, when one of them scrunched up the leaflet and told Howells to “Fuck off”. 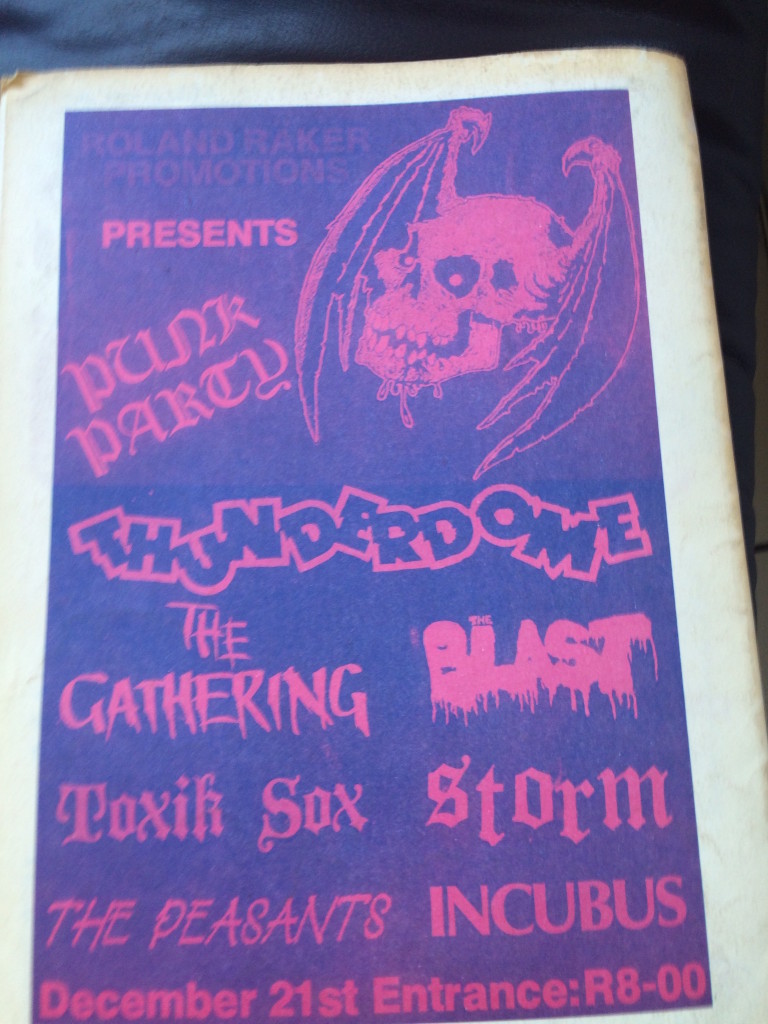 Howells continued to make his way through the club, when suddenly the man who had taken offense at the leaflets reappeared with a bunch of the Club’s bouncers in tow. Howells was hauled off to the manager’s office. The manager demanded to know why Howells was handing out “This communist shit” in his club.

Howells tried to explain that the leaflets were not communistic. The bouncers were not impressed and wanted to attack Howells. A debate between management and the bouncers then ensued about the relative merit of either calling the police or simply beating the hapless Howells up.

At this point, the door of the office burst open and in marched Khaki Monitor’s lead singer, Tonia Selley. Selley grabbed Howells’s arm and warned the bouncers that if they dared touch him, they would be in “big shit”. Eventually the police arrived and started to inspect the leaflets. Because those particular ECC pamphets had not been banned, they could not arrest Howells.

After the police left, management threw Howells out of the club. Howells soon realised that he was in for more unpleasantness because the six men to whom he had orignally given the leaflets, were waiting outside for him. They started calling him “k*ffir boetie” and a fight broke out in the middle of Plein Street. Howells and a friend tried to run away but couldn’t and eventually Howells was caught at the end of an alley way and beaten until he lost consciousness.

Howells had to be taken to hospital and ended up in a neck brace.

Unfortunately, gigs for Khaki Montor started drying up and eventually the band fizzled out. Khaki Monitor did not take part in the Voëlvry tour, but Tonia Selley provided backing vocals for the Gereformeerde Blues Band and Steve Howells played the drums in Bernoldus Niemand’s band, die Swart Gevaar.

Khaki Monitor’s music lives on though and you can buy the album that they recorded in the 1980s, but which was never released, here Khaki Monitor