A short history of the GBB

The GBB was managed by “Dagga” Dirk Uys and formed at his insistence. Uys believed that the only way that Kerkorrel and Kombuis could take their message to a wider audience was by using rock and roll as a vehicle. Initially Koos Kombuis was a member of the GBB, but eventually he drifted away and performed as a solo artist.

The name of the band parodied the Calvinistic Nederduitse Gereformeerde Kerk, which was enormously powerful in apartheid South Africa.

The ‘Blues’ part of the name was explained by Kerkorrel as such, “If you grow up in this country you get hit by Calvinism, whether you like it or not, whether you’re black or white or English or whatever, Calvinism hits you, you go through the system. That’s the sort of blues we’re talking about, blues of growing up in this society here”.

The first album that the Gereformeerde Blues Band appeared on was the Voëlvry compilation album, which consisted of nine songs. It featured the music of artists who sang mainly in Afrikaans and whose lyrics satirized the apartheid government. The album was released by Shifty Records in November 1988. Two songs by the Gereformeerde Blues Band, “Ry” (Ride) and “Hillbrow” were included on the album. Others who appeared on the album were Bernoldus Niemand (the stage name of James Phillips), Andre Letoit, Khaki Monitor, the Genuines, Randy Rambo and the Roughriders, Koos and the Kerels.

The first album by Die Gereformeerde Blues Band was called “Eet Kreef! ” (Eat Crayfish). The title referenced the statement made by Marie Antoinette and equated the situation in South Africa where the white population lived in relative luxury while the country’s black citizens were consigned to a life as serfs and poverty, to that of France prior to the revolution.

Theunis Engelbrecht of the Beeld newspaper declared that Eet Kreef! Was “the most important and exciting Afrikaans album ever released; giving Afrikaans a fresh, brand new sound”. He went on to say that the band sang about issues that were currently affecting the youth and not about “nature and pleasant daydreaming”, which had characterised Afrikaans pop music up to that point. As a result the album represented a “great step forward for Afrikaans music”. The music of the Gereformeerde Blues Band, according to Engelbrecht was “open and liberating, as opposed to the cliquey lyrics of Musiek-en-liriek and the luisterlied”. According to him the album proved that Afrikaans music was able to be “real and relevant”. Engelbrecht wrote that critics who had in the past dismissed Rabie because of his perceived lack of musical ability would have to “swallow their words” as a result of this album, in which Afrikaans music for possibly the first time sounded “streamlined, modern and honest”.

The first track on this album was “Sit dit Af ” (Switch if off). In the song, Kerkorrel sang about how he was unable to escape from the then Prime Minister of South Africa, P.W. Botha’s constant television appearances. The title of the song referred to Kerkorrel’s attempts to switch off the television in order to escape Botha’s face.

At the time when this song was written, South Africans had access to four SABC television stations which were all dominated by government propaganda and one independent, cable channel MNET.

In the song, Kerkorrel also made mention of a well-known mannerism that P.W. Botha had of pointing his index finger upwards into the air when he was making a point, thus Rabie sang about being unable to escape the man “met sy vinger in die lug” (with his finger in the air).

Anne Grobler in an interview described how Kerkorrel had always disliked P.W. Botha intensely and after hearing him give a speech had said to her, “One day I am going to write a song about that man”.

Eet Kreef also included the outstanding “Hillbrow” which was arguably the best song that Kerkorrel ever wrote. In the song, Kerkorrel described the multi-cultural Johannesburg suburb of Hillbrow in minute detail. Kerkorrel accompanied himself on the concertina which was an instrument that had traditionally been associated with boere musiek.

Koos Kombuis recalled the first night that he had heard Kerkorrel perform “Hillbrow” at the Black Sun. At that stage the only accompaniment to the song was a piano. Hearing the song gave Kombuis cold shivers and he realised immediately that Kerkorrel had written one of the best Afrikaans pop songs ever.

The GBB only produced one album, but their influence on Afrikaans pop music is felt to this day. 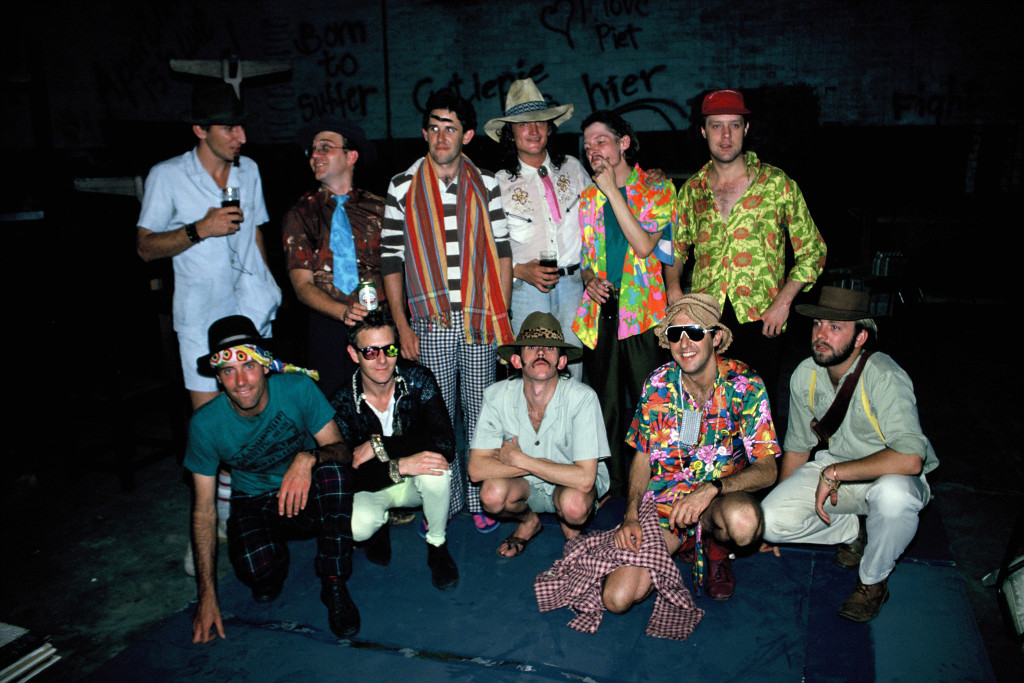