Randy Rambo and the Rough Riders was a side project of journalist and music critic, Theunis Engelbrecht. One song by Randy Rambo, “Jong Dames Dinamiek” was included on the Voëlvry compilation album.

The Rough Riders were the first Afrikaans band to have an album banned for possession and distribution in South Africa by the Publications Control Board. The album that so incensed the censors was called “Die Saai Lewe” (The Dull Life) and was first released in 1989.

The banning of Die Saai Lewe, just a few months after it had been released caught Engelbrecht by surprise. He had had written some very negative reviews about an Afrikaans singer, which had incensed her father. As a result, the father allegedly made an official complaint to the Publications Board about Die Saai Lewe and according to Engelbrecht, this is the reason why his record was banned.

Apart from the Publications Control Board banning the album, the SABC also banned Jong Dames Dinamiek from airplay.

Another time that Engelbrecht’s writing got him into hot water was when some positive reviews about performances by Johannes Kerkorrel and André le Toit that he had written, were published. Engelbrecht’s editor at Die Burger, Willem Wepener, received a letter from PW Botha demanding that he fire Engelbrecht because of his support for Kerkorrel and le Toit. Wepener ignored Botha’s directive.

Engelbrecht had come up with the name Randy Rambo and the Rough Riders one day whilst reading the Huisgenoot. The magazine had included an article about Prince Andrew, who the tabloid press in the UK had dubbed “Randy Andy”. That edition of the Huisgenoot also featured an article about Sylvester Stallone’s successful series of Rambo movies. Engelbrecht immediately realised that Randy Rambo would be a great name for the front man of a band. The name of the album, Die Saai Lewe was taken from a play of the same name written by Chris Pretorius.

In 1996, Die Saai Lewe was resubmitted to the Publications Control Board and the ban was lifted, but the album was restricted to listeners over the age of eighteen. 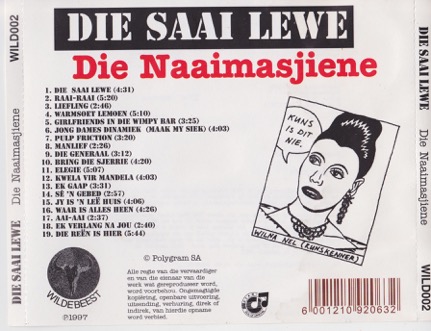 Engelbrecht first started composing music after he was introduced to artists such as Nina Hagen, Frank Zappa and Pere Ubu by the poet Johan van Wyk. He collaborated with Willem Möller (who was the guitarist for the Gereformeerde Blues Band) on a song that was inspired by a well-known advert for an air freshener. The advert featured a conversation between a couple who discuss the bad smell in their friends’ home (“Gawe mense, die Jansens. Net jammer dat onaangename reuke hul woning bederf!”).

Engelbrecht approached Lloyd Ross of Shifty Records and asked him to release the Randy Rambo material on Shifty’s Budgie Beat series. Budgie Beat featured music that was not mainstream and the recordings were distributed mainly by post.

Engelbrecht and Möller recorded much of the material for Die Saai Lewe in the cellar of Möller’s home in Yeoville. Möller played all the instruments on many of the tracks on the album. Tonia Selley (Karla Krimpelien of the Gereformeerde Blues Band) contributed vocals to the song “Raai Raai”. Another member of the Gereformeerde Blues Band, Jannie “Hanepoot” van Tonder played trombone on the song “Kwêla vir Mandela”.

Jong Dames Dinamiek is about the women’s organization of the same name that was regarded by many to be quite an elitist group during the apartheid era. The lyrics of the song, which are sung from the point of view of a wealthy housewife, made fun of a number of stereotypical elements of South African culture and drew attention to the sexist and patriarchal nature of South African society at that time.

The lyrics of Jong Dames Dinamiek, also include a number of military themes, reflecting the impact of the arms build up that took place in South Africa under PW Botha. Words such as “mag”, “geweld” and “krag” are used throughout the song. The couple’s sex life is also referred to in warlike terms. The husband, we are told, is a “reliable shot” in bed. The last part of the song, in which the female narrator celebrates her sensuality stands in sharp contrast to the first verses which detail the rigidity and conservatism of life under apartheid. The woman’s description of her very satisfying love life was at odds with the Calvinistic beliefs, which characterized apartheid South Africa. 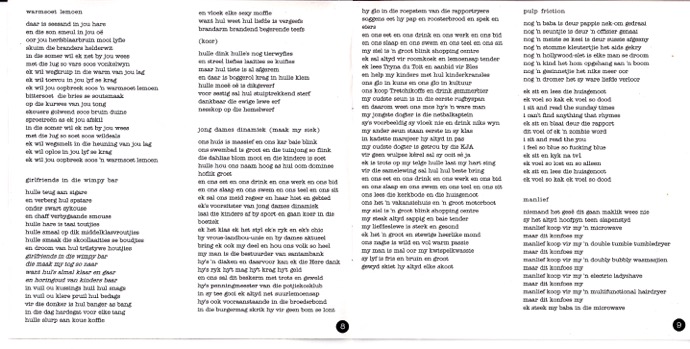 “Bring die Sjerrie”, according to Engelbrecht, was particularly difficult to record, it featured snippets from speeches by PW Botha and Eugene Terreblanche. Engelbrecht and Möller laboured for hours to extract parts of Terreblanche’s speech and to dub them into the song. After they had completed the track, the two musicians staggered out of the recording session, feeling as though they had been assaulted.

Die Saai Lewe also featured a cover version of the song “Liefling”, which was made famous by Gé Korsten (who was involved in the sacking of Johan Esterhuizen, head of CAPAB after Esterhuizen went ahead with a press conference about the cuts that CAPAB was trying to enforce on the show Piekniek by Dingaan).

Liefling, as performed by Randy Rambo was very different to the love song that Korsten had made famous. Instead of pledging undying love to a woman, as Korsten did in his version, the song on Die Saai Lewe, begins with the line, “Liefling jy weet, dat almal deesdae mal in die kop is” (Love you know that everyone is mad in the head these days). In the chorus the singer notes that there is “bloed en derms in al die strate” (there is blood and guts in all the streets), which was a reference to the situation in South African at the time that the album was released. 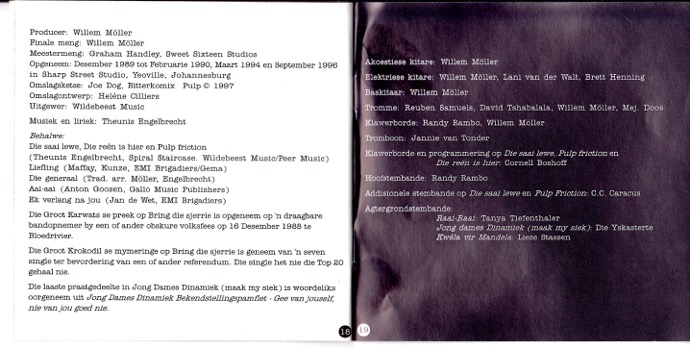 Johannes Kerkorrel covered the song, “Sê ‘n Gebed” (Say a Prayer) from die Saai Lewe, on his album Ge-trans-for-meer. The title of the song was changed to “Sê Sê” (Say Say) on the Kerkorrel album. Kerkorrel also wrote new music for his version of the track. The original lyrics by Theunis Engelbrecht were generally retained in the Kerkorrel version, except that a swear word was removed and a plea for a prayer for gay people was added. 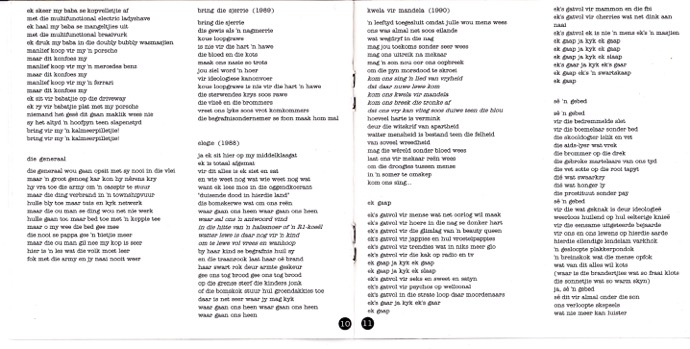 Another song on Die Saai Lewe, “Ek verlang na Jou” (I miss you) is an updated version of a song made famous by the Afrikaans songstress, Sonja Herholdt. Herholdt’s version was a love song about how much a female protagonist was missing her male lover, the version by Randy Rambo is a plaintive ballad in which the lyrics were not altered and so, the male vocalist sings about missing his male lover.

Similarly, Kerkorrel later also put a new slant on the lyrics of an old song. He recorded the traditional song Al Lê die Berge Nog so Blou, which appeared on his Ge-trans-for-meer album. The song, which was a major hit for Kerkorrel, was interesting because in the traditional version, the song was sung from the perspective of a lover leaving his wife or mistress. In his version, described by Stef Bos as “sheer genius”, Kerkorrel changed the sex of the person who was being left behind to that of a male and the song thereby became a gay anthem. 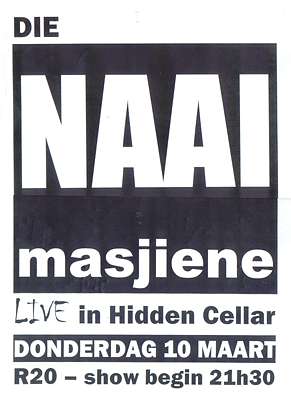 Engelbrecht had always envisioned that Die Saai Lewe would be a one off project. However he was approached to perform at the first Houtstok festival and so, he put an actual band together for the occasion. Engelbrecht also recruited a troupe of dancers and back up singers, known as die Yskasterte to perform with die Naaimasjiene.

Most recently, die Naaimasjiene have contributed their rendition of the poem “Mamma” to a compilation album made up of bands performing their interpretations of the poems of Ingrid Jonker set to music.

The information in this blog has been taken from numerous sources. The main source has been a blog by Theunis Engelbrecht which can be found here Die Storie van Die Naaimasjiene

Die Saai Lewe is a very important album in the history of South African Popular Music. Listen to the album (or better still – buy it!) here Die Saai Lewe