by dpelser on September 6, 2015 in Uncategorized

In 1988 when Piekniek By Dingaan was first performed, South African society was closed and conservative. Music that did not meet the SABC’s standards would not make the radio playlists and the Government Censor had the power to ban any material, including music, which it felt was unacceptable.

As a result, some music (perhaps understandably) fell foul of the censors. Pink Floyd’s “Another Brick in the Wall” with its strong socio-political message was banned. However even the music of seemingly middle of the road artists could attract the ire of the censor. Chris de Burgh’s song Spanish Train was banned in 1976 because it was considered to be blasphemous. As a result the name of the album was changed from Spanish Train and other stories to Lonely Sky and other stories.

The government prevented South Africans from hearing, reading or seeing anything that did no conform to its standards. 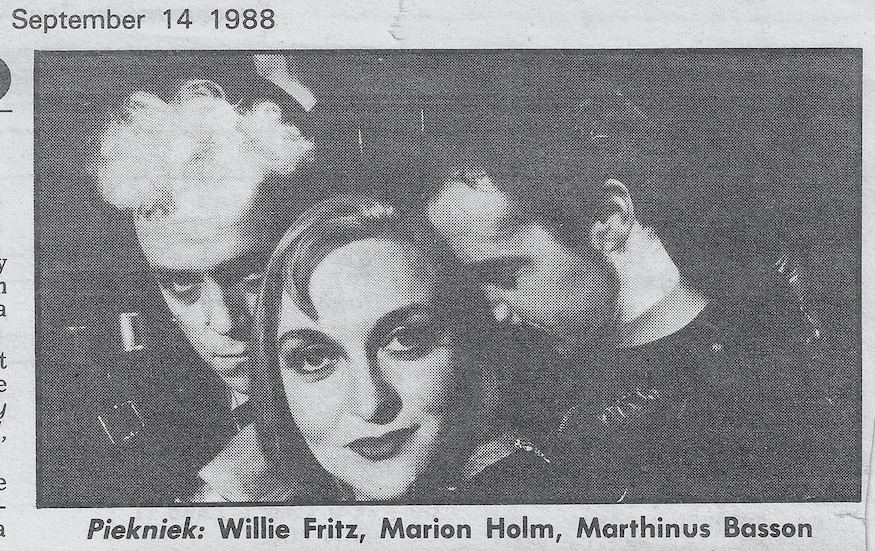 Then in 1988, into the mix came “Piekniek by Dingaan”, performed in Afrikaans by young people, the so-called Kinders van Verwoerd, who were unequivocally rejecting the Calvinistic and racial principles that underpinned the Nationalist government.

Much of the material in the play would hardly raise an eyebrow today, but in 1988 it was highly controversial, here are a five examples.

1. The play mocked the constraints placed on the South African media by the government and how the urgency of the situation in the country remained largely under-reported in the mainstream newspapers. Cast members read out aloud all the trivial subjects such as, Naas Botha, Carike Keuzenkamp, rugby scores, Dr Verwoerd and Dr Strydom, that would appear on front pages, whereas the death toll as a result of the unrest in the country would appear on the back page, “koerante só propvol sinlose inligting dat niemand later meer die verskil kan agterkom tussen nuus en leuen, halfleuen, verdraaide of gedeeltelike waarheid nie”.

3. The cast made fun of conservative afrikaans artists such as Sonja Herholdt, altering the lyrics of her well known song “Waterblommetjies” to “Petrol bommetjies in die Boland, petrol bommetjies in die Kaap, arresteer hul net soos daar in Rusland, en sê jys baie lief om in die tronk te gaan slaap”, thereby making the love song a commentary on the unrest that was gripping South Africa at the time.

5. The cast celebrated the very few areas in South Africa that where people could mix, no matter what their race, religion or sexual persuasion was, places such as Woodstock and Mayfair. This segment culminated in Ralph Rabie singing his classic song “Hillbrow”, which documented in great detail the multicultural nature of the place.

The play was constantly updated to include topical incidents that were being reported in the press, even commenting on letters to the Editor that had been written about Piekniek. 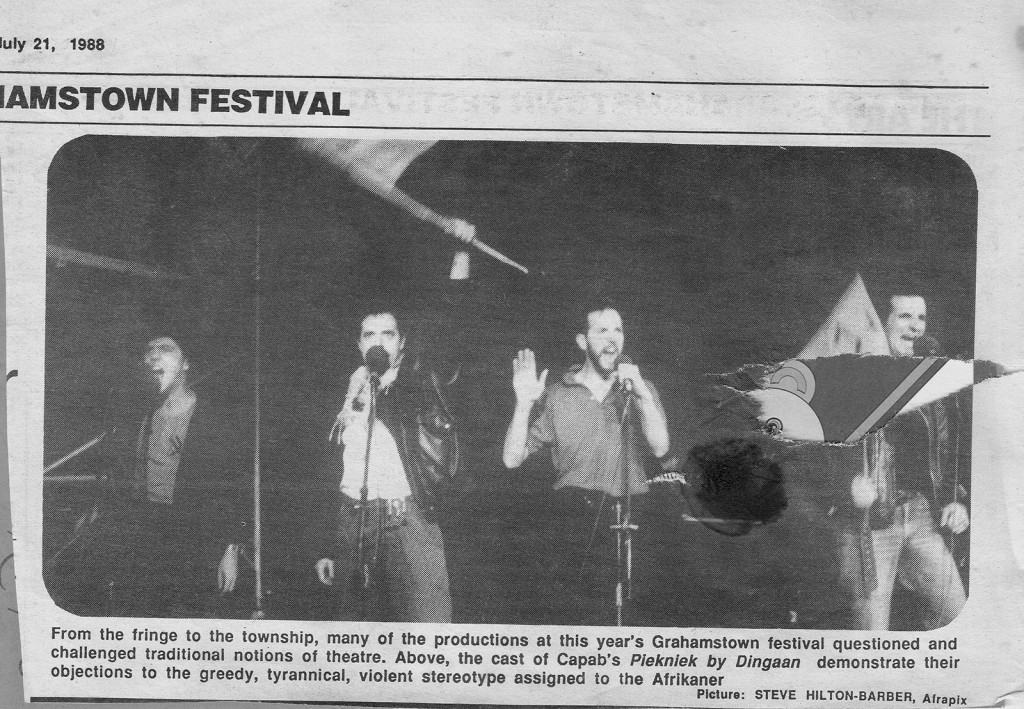 The rights for Piekniek by Dingaan are held by Albert Maritz, Koos Kombuis and others. Thanks to Koos for the comment on this.

The newspaper clippings in this post were contributed by one of the cast members, Willie Fritz.

Thanks to vetseun for helping me to collate material for this post, link to his site here vetseun