Hope I die before I get old

by dpelser on November 15, 2015 in Uncategorized

A number of the musicians that were active around the Voëlvry scene in the 1980s died before their time. Three notable examples that spring to mind are Johannes Kerkorrel, James Phillips and Neil Goedhals, but there are more.

In this post I would like to share the results of some studies done by Prof Dianna Kenny of Sydney University. The original data appeared on The Conversation website which you can find over here The Conversation

The age of 27 seems to be particularly dangerous for musicians. Some of the famous stars who joined the so-called “27 Club” by dying at this age include, Jimi Hendrix, Janis Joplin, Kurt Cobain, Amy Winehouse, Brian Jones, Robert Johnson and Jim Morrison.

So, do most popular music artists die at this age? Prof Kenny investigated this by researching the deaths of 11,054 musicians who died between 1950 and 2010 and for whom an accurate age of death could be determined.

The results were interesting and indicate that the 27 club is a myth. Prof Kenny’s research revealed that actually the age of 56 is the most dangerous for musicians. Some well-known musicians who died at the age of 56 include Eddie Rabbitt, Tammy Wynette, Mimi Farina, Johnny Ramone, Chris LeDoux, Vandy “Smokey” Hampton, and Charles “Baby” Tate.

Here is a graph which shows at what age musicians that were included in this study were most likely to die. 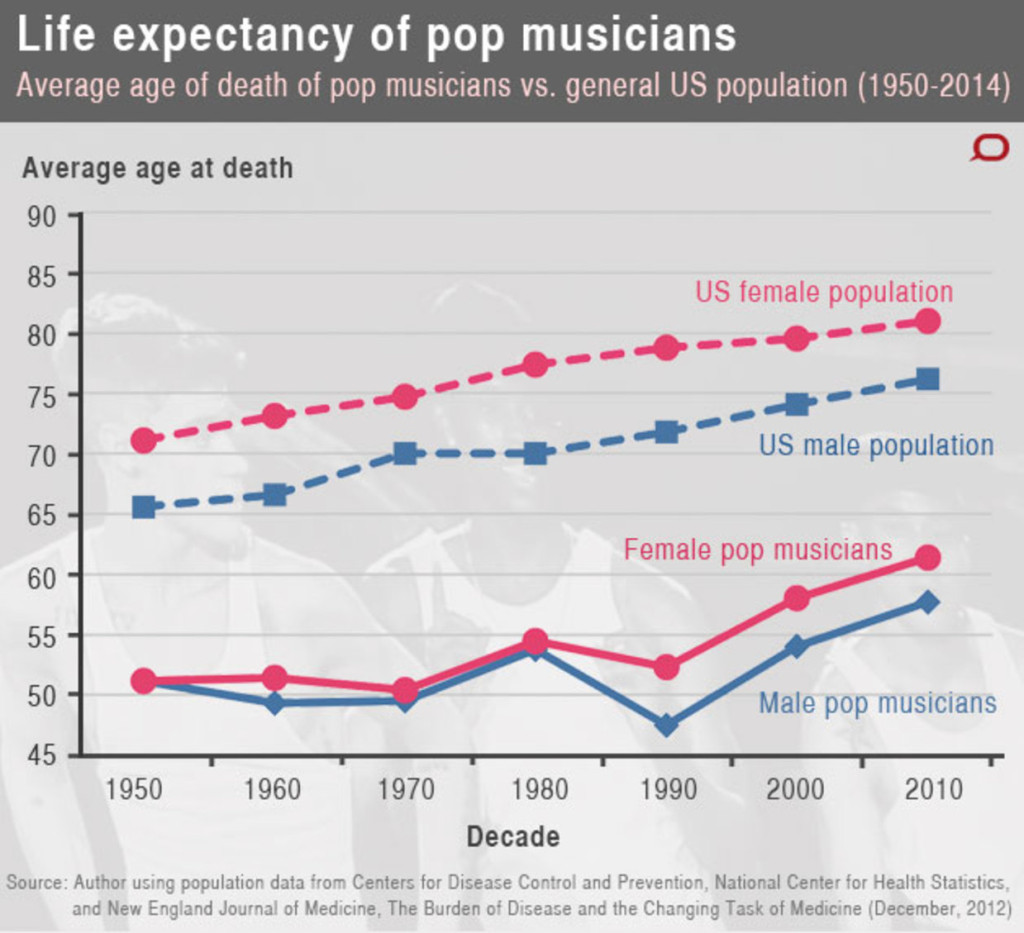 As can be seen by the graph above, both male and female musicians do not live as long as their counterparts who chose more conventional careers. 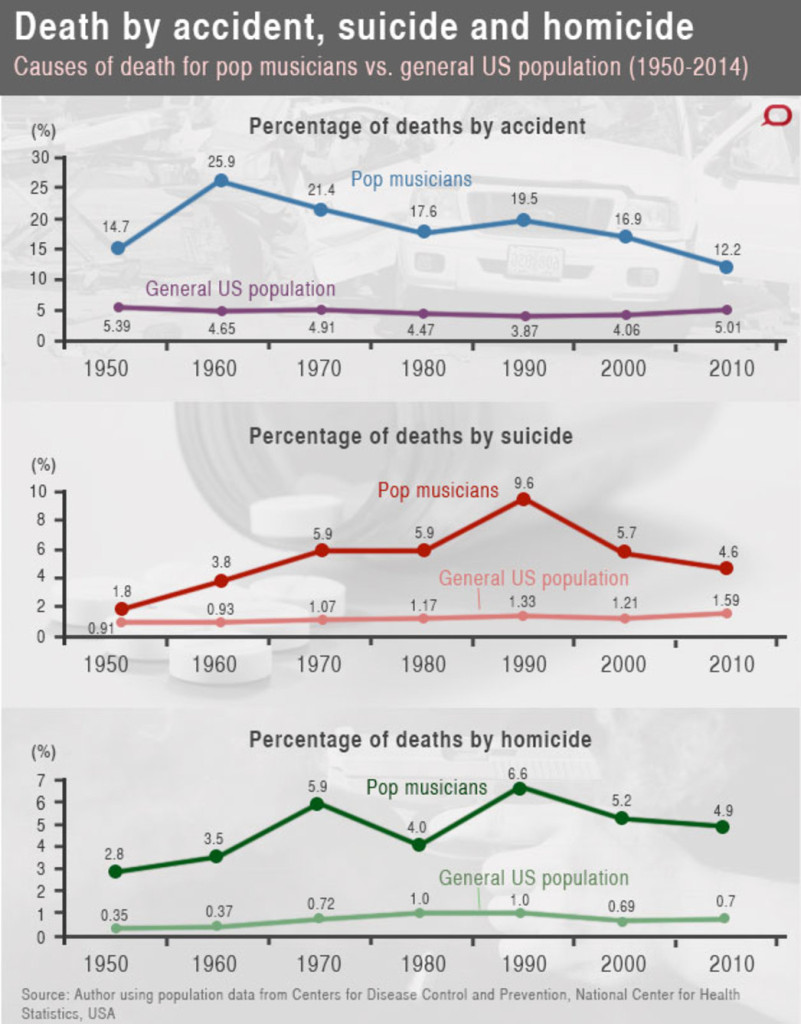 Another interesting finding was that the deaths of musicians differed, depending on the genre to which they belonged. 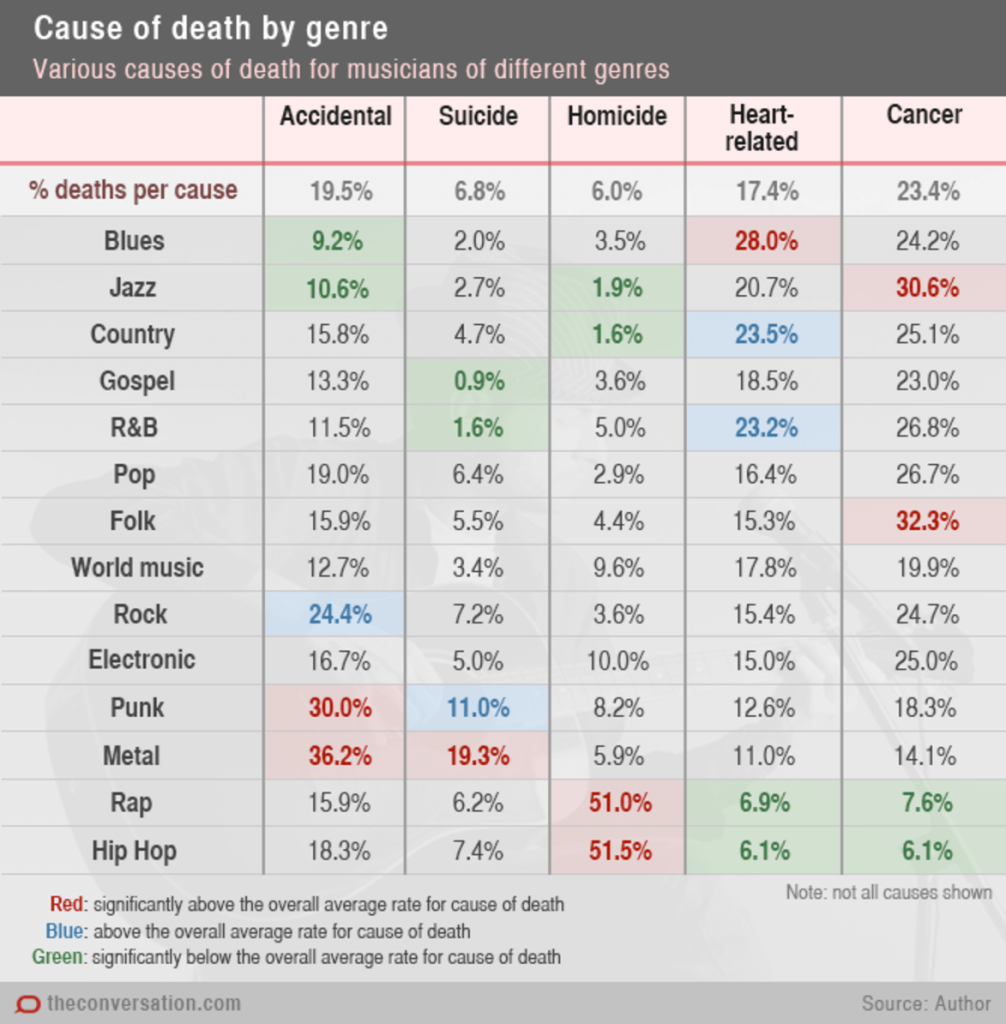 Male musicians were more likely to die from accidental deaths and those musicians in the rock and metal genres were most at risk of death as a result of accidental causes (including car accidents and accidental overdose).

Murder accounted for many deaths in the hip hop and rap genre.

Punk rockers and metal musicians were found to be more likely to die of suicide (11% and 19% respectively).

Blues musicians were more likely to die of heart-related illnesses and folk and jazz musicians succumbed to cancer.

Whilst Roger Daltry has survived to a ripe old age, the lyrics of The Who’s My Generation “I hope I die before I get old” are in fact, very much the truth for musicians.